Welcome to TracfoneReviewer where we share the latest news, review and Tracfone Promo Codes!

An updated, ultra-budget friendly smartphone from the popular Motorola brand has been released by Tracfone in early 2020 in the form of the Moto E6.

The Moto E6 comes with a large, 5.5" HD touchscreen, Android 9 Pie, 13 MP camera, and 1.4 Ghz octa-core processor. It really packs in a lot of features into a very low price point.

The Moto E6 settles in as the next phone in a long line of Moto E devices (that was first launched back in 2014) and we will cover all the specs and features including how it stacks up to the predecessor, the Moto E5 which is also available from Tracfone.

There have been several new smartphones recently released, with the Moto G7 Optimo also released around the same time as the E6, in early March 2020. For all the new devices from Tracfone, see our Latest List of Tracfone Smartphones.

The Moto E6 was first released by Motorola in 2019, and can be found on Amazon unlocked for use with GSM or CDMA service on Tracfone BYOP. However, the price quite a bit higher than the Tracfone version.

Let's start getting into the details of the Moto E6 with our top Pro's and Con's list.

Some of the top points to highlight are the powerful Octa-core processor and amazing battery life, often well beyond a single day. It is also priced very low, with several retailers listing it for below $50 with airtime bundles and more.

One of the drawbacks, however, is that the Moto E6 only comes with 2 GB RAM and 16 GB internal storage, which might limit the multitasking ability of the phone or how will it will handle resource intensive apps and games, and also how many apps and media that can be loaded on the phone at one time.

The big brother to the Moto E6, the Moto G7 Optimo, has 32 GB internal storage as well as some other upgrades, and the Samsung Galaxy A10e is another option with 32 GB storage for those who might want that extra space. 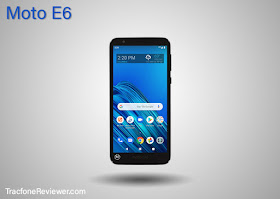 Motorola was originally an American telecommunications company founded way back in 1928. But in 2011, after several years of significant losses and challenges, the company was split and the mobile phone segment of the company was sold to Google. Then, just two years later, the Motorola mobile phone segment was again sold, this time to Lenovo in 2014.

The Moto E lineup was created as an even more budget friendly option compared to the Moto G line, and it has been consistently positioned at a price of around $100.

Many Tracfone BYOP users are very familiar with the Motorola brand as it has released a number of low cost unlocked phones capable of being used with Tracfone going back to the original Moto G.

Touchscreen
The E6 brings a 5.5" IPS LCD capacitive touchscreen with a resolution of 720 x 1440 pixels. It uses the popular 18:0 ratio, meaning the phone is taller than some, but is not too wide to still easily fit in the hand. Pixel density is about 296 ppi, which is good and gives a nice, crisp screen.

Overall the screen is a great size and resolution, delivering a solid picture with no complaints for a phone at this price. But we do miss out on any Gorilla Glass protection, so might be best to invest in a good screen protector or case. 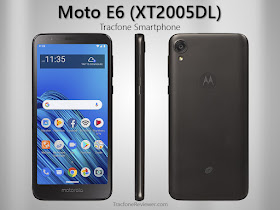 Performance - Processor, Storage and RAM
The 1.4 Ghz octa-core processor from Qualcomm is a decent performer but the phone only comes with 2 GB RAM and 16 GB internal storage which will really limit the apps and media that can be kept on the device, and the ability to multitask and use more demanding apps or games.

There is a MicroSD slot for additional storage, up to 256 GB, so that may help with the storage problems for some.

For most smartphone users,, 16 GB internal storage just isn't enough, and we find this a major drawback for this phone. If you have previously had issues with running out of storage on your phone, consider a device with 32 or 64 GB storage to help resolve that problem.

Camera
One of the surprising features on the Moto E6 is the 13 MP rear camera with LED flash, HDR, panorama and more. It actually performs very well for the price thanks in part to a larger sensor compared to the previous model.

The front camera has a 5 MP sensor and also has many of the same features.

Want to take better photos? We created a guide with 8 tips for better cell phone pictures to help.

Battery
There are some consumers who will be very happy to see that the Moto E6 comes with a removable 3,000 mAh battery that has enough power to last a full day on a single charge with moderate usage. This is thanks to both software improvements and the efficient processor.

The battery charger is a standard Micro USB connection. It would be nice to see Motorola upgrade to the newer, USB-C which many phones now use.

Android OS
Motorola is well known for leaving the Operating System (OS) on their phones mostly stock, which means you get less bloatware.

The phone features Android 9 Pie, which comes with a number of new features and improvements over previous versions including gesture navigation, app usage statistics and time limits, and adaptive battery for improved performance.

Tracfone has occasionally updated the software version on their smartphones, but in many cases their phones are stuck with what they come with, so it is best to get a phone with the latest OS, which at this time is Android 9.

Get the most from Android with our List of the Best Android Apps for Tracfone users.

Design
The design of the Moto E6 is not particularly interesting with a plastic shell and rather large bezels on the front screen.  The phone also lacks a fingerprint sensor, which has become a very popular security measure, and only comes in two colors, black and dark blue.

Yet it fits well in the hand, and for the price, we can't expect too much from the design side.

Conclusion
The Moto E6 brings a nice size screen, good camera and processor, and all-day battery at a very reasonable price. While the storage and RAM are not the best, if you don't need it then this phone packs a lot for the price and is one of the best phones available from Tracfone for under $50 at this time.

Moto E6 vs Moto G7 Optimo
The Moto G7 Optimo, also released at about the same time, brings a number of improvements over the Moto E6 as one would expect for a phone that is more than double the price. The G7 has a larger screen, better processor, more internal storage, and fingerprint reader. However, both phones come with 2 GB RAM , Android 9, and 3,000 mAh battery, with the G7's battery non-removable.

We would suggest the Moto G7 Optimo for users who spend more time on their phone, or need the extra storage space.

Moto E6 vs Moto E5
Looking at the E6 versus the phone it replaces, we see they both share similar performance specs and the E5 actually has a fingerprint sensor. But the E6 has a number of small upgrades, like the improved camera, newer Android version, and removable battery.

We find the E6 a better choice simply for the updated OS, which brings a lot of improvements and security measure over older versions.

Where to Buy the Tracfone Moto E6

And view device tutorials and more on the Tracfone Website.

This concludes our review of the Tracfone Moto E6, we hope you found it useful!

If you are new to Tracfone, start with our Beginners Guide!

Join us over on Facebook for the latest news and posts or send us a message for more direct help questions.

Take a look at some of our recent posts, including a Guide for Making your Airtime Last Longer and Everything you Need to Know about Data Cards.

And don't miss out on the best Tracfone Deals, Discounts and Sales!